You are here: Home > Women In Mining Call For Protection Against GBV.

Women In Mining Call For Protection Against GBV. 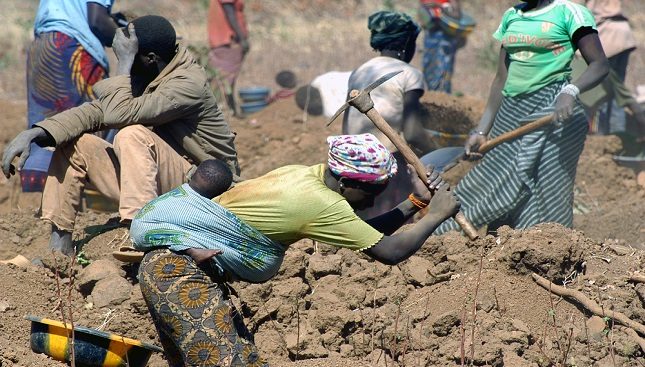 Women in mining are experiencing a myriad of problems such as victimisation, dispossession of their claims by men, and gender-based violence, (GBV) Great Dyke News 24 reports.

Speaking during a media engagement organised by Oxfam today, Zimbabwe Women in Mines and Mining Development Trust secretary Chiedza Chipangura has pleaded with authorities to put in place legal frameworks to protect women in mining.

“There has been so much victimisation, our mining industry is so politicised, personally, l was victimised in 2018 and because l didn’t have money to defend myself and to take somebody to court, l was left in tortuous (situation and), emotionally broken, including my family.

“So who would want to come out and stand up and say so and so especially with the politicians, they are doing it wrongly.

” l was victimised not because of anything but l was trying to correct the thugs who have taken somebody’s mine and l have gone through the legal channel, through the Ministry of Mines and managed to restore order at the mine,” she said.

She added that some women within the industry are also affected by the rampant machete wars happening in different mining towns adding women are negatively stereotyped.

“The industry has been so male-dominated and women have been labeled otherwise. Women in mining are regarded as prostitutes,we are labeled thieves. This is the norm happening in the industry.

“We have women who had their breasts cut off with machetes, some are being beaten up in mines so it’s not like the women are not there, the issue of victimisation cyberbullying, gender violence is affecting them and so if we have some kind of protection, we will have more coming out,” she said.

Women face different economic challenges as a result of the lack of access to, use of and control over land and other productive resources, licenses, finance, and geological data.

In many cases, traditional beliefs prevent women from utilizing natural resources and even denies them any control over earnings where they have access to the resources.

The inability to access finance contributes to women’s inability to invest in mining equipment and technology necessary for a successful business.

At policy level, the existing discrimination against women often puts them at a lower order in policy decisions affecting them. The de jure and de facto inequity in access to and control over land and property rights constraints women from accessing various other determinants of mining business success, such as finance.

Despite the numerous challenges, women in ASM have demonstrated the enormous potential to achieve substantial financial gains and manage successful mining businesses.